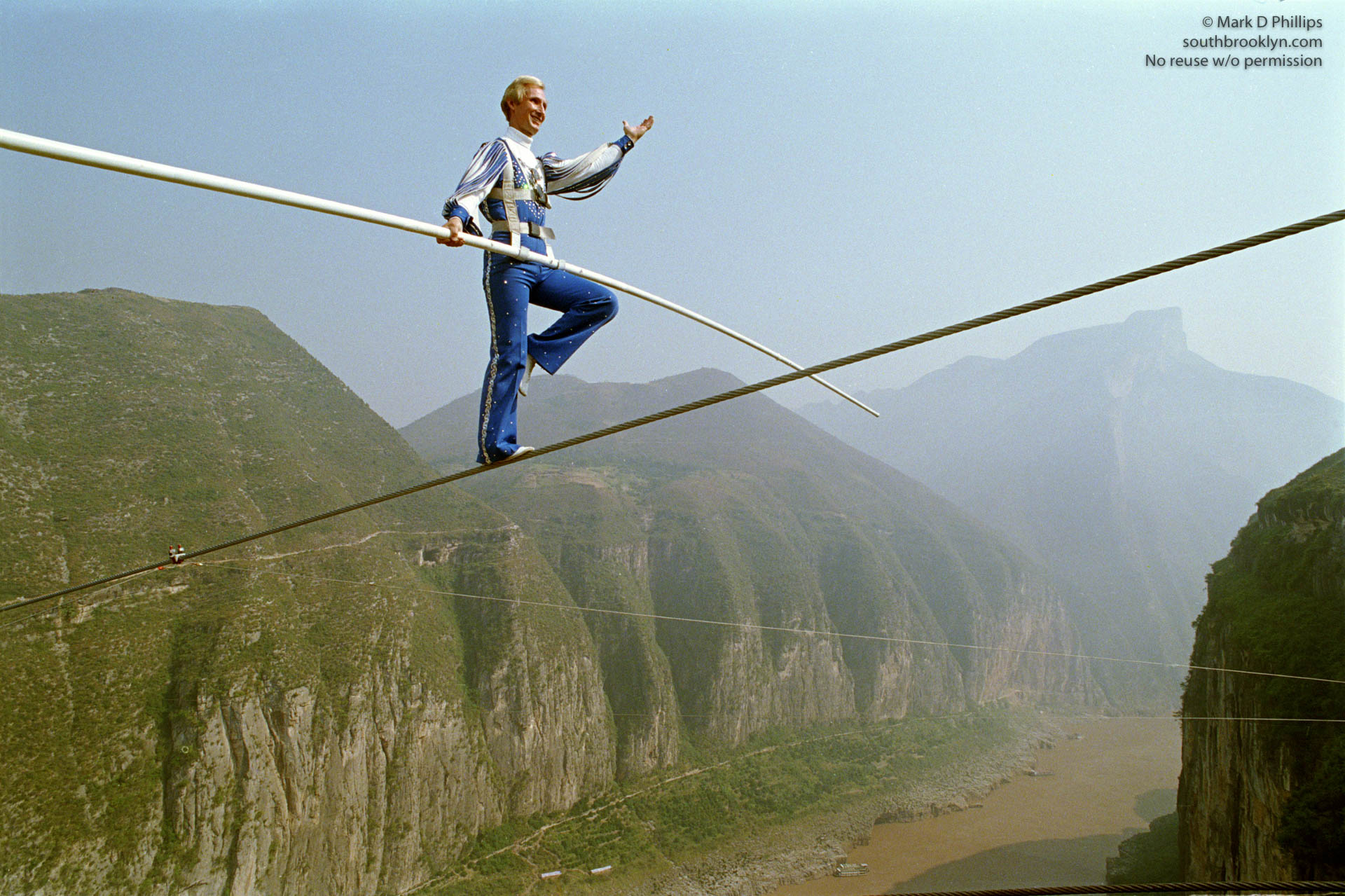 The life of Jay Cochrane, who passed away in Niagara Falls, Ontario, Canada, last week at the age of 69, was like a story from an adventure novel or a movie. It was dramatic and eventful. As a boy he dreamed that it would be that way. Perhaps many of us do. But he was different. He went out and made it happen. 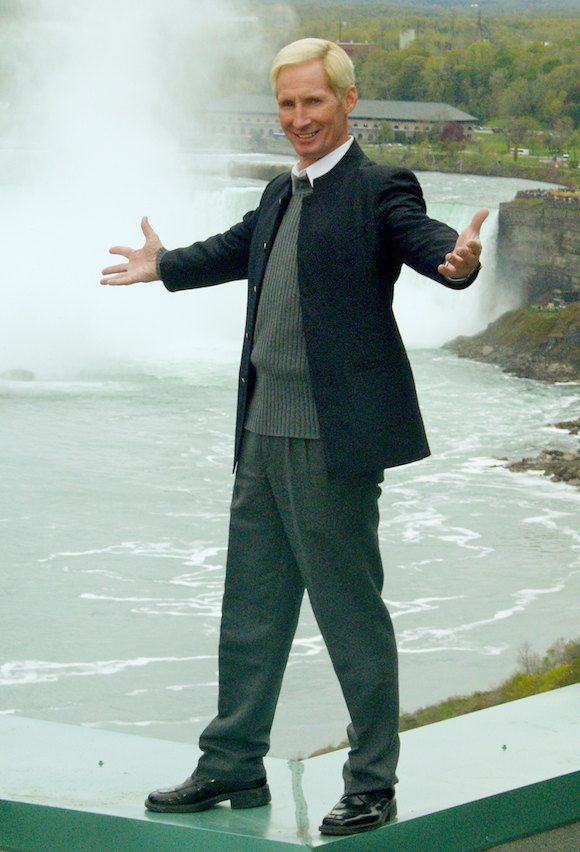 On high wires and sky-wires around the world, he lived the life of his dreams, inspiring and entertaining millions of people. He also discovered something else along the way: the need within himself to help others. His adult life was founded upon those two great desires: to perform some of the greatest, most spectacular feats the world has ever seen and to bring joy and hope into the lives of children in need. His art showed others what was possible.

A sort of citizen of the world with his main residence in Florida, his spiritual home in China, and his reputation gained almost everywhere else, James Cochrane was a Canadian who was born in Saint John, New Brunswick on May 1, 1944 and grew up in the northern Ontario towns of North Bay and Sudbury. The son of a mining industry man and a music teacher, living far away from the big city lights, he dreamed of someday being more than just someone on the outside looking in. Rambunctious and active as a child, he knew he wanted to leave where he was and get to something bigger and more exciting, but didn’t know exactly what that was … until his mother took him to the circus.

There, at age eight, he saw a man perform a somersault on a high wire. It was magical and dangerous, the sort of thing that only superhuman people with big dreams did, and little Jimmy Cochrane knew it was for him.

“That’s what I want to do with my life,” he told his mother instantly.

Within days he was walking not just on broomsticks balanced on his back porch but even upon his mother’s clothesline; within years he was teetering along the railings on the giant water tower looming high above his town.

Then, he began running away from home, not so much to leave his family, but to get somewhere, anywhere in the great beyond, somewhere important to do important things, somewhere that made his burgeoning imagination soar. At the tender age of fourteen, he left for good.

On that day in 1958, he took what few coins he had saved and caught a bus for the big city: Toronto on Lake Ontario. Once he got there, he made a beeline for The Canadian National Exhibition and the big show it was featuring, The Royal Hanneford Circus. He asked them to take him on as an employee. They tried to send him home but he kept returning and finally was given a job cleaning up after the horses and elephants. That humble beginning was the start of one of the greatest careers in show business history.

Taken under the wing of renowned aerialist Struppi Hanneford, also known as Priness Tajana, the indefatigable Cochrane learned just about every art in the circus world, perfecting everything from the trapeze to the high wire. He worked at it as if his life depended on it. Soon, his name was in lights.

In 1965 he was walking on a 90 foot high wire at Varsity Stadium in Toronto when it collapsed under him. Someone, not him, had not tightened a single bolt properly. His injuries were horrific (a broken pelvis, two broken legs and feet, four broken ribs) and doctors told him he would never walk again, let alone ascend a wire. He was destined to spend the rest of his life in a wheelchair. But persevering through nearly four years of rehabilitation, he learned not only to walk again but, from the time he finally healed and onward, to erect and perform upon some of the greatest high wires of all time. 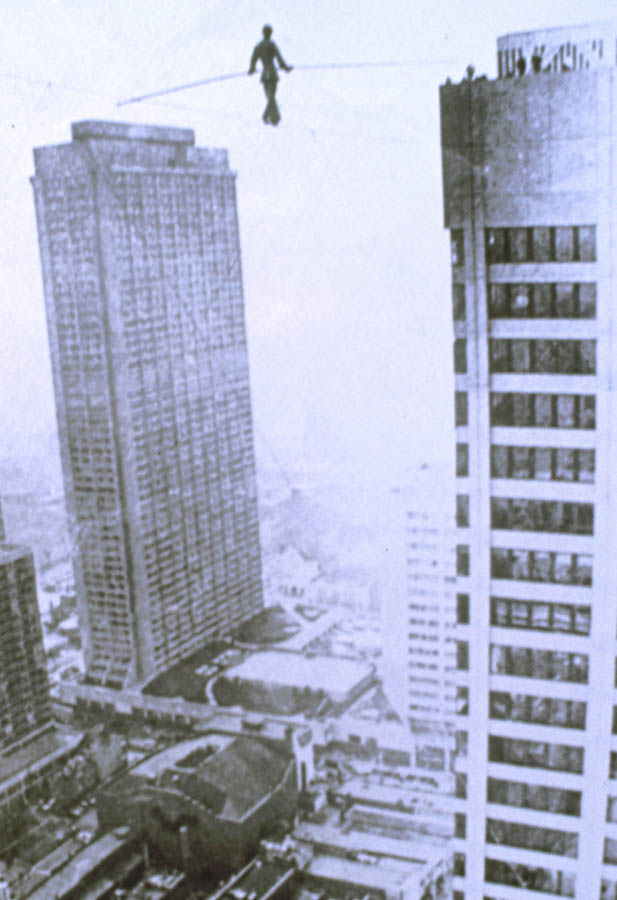 In 1970, still just in his twenties, he ascended his first “skywire” forty stories high between two skyscrapers for the opening of the Hudson Bay Centre tower in downtown Toronto. Not certain that he could do it, high above thousands of people on the city streets, Cochrane summoned a remarkable courage that would become his trademark, and relying on his sure-footed technique, accomplished the feat without a hitch. He learned that the impossible was possible.

“Life is one step at a time,” he told himself that day, “and don’t look back.”

From then on, the sky was barely the limit and Cochrane’s career truly took off. He commenced an assault upon the high-wire record books that no figure in this great art’s history has achieved.  At awe-inspiring sites around the world, on sky wires Cochrane himself erected like a veritable Napoleon in charge of little armies of tradesmen, he enacted amazing ascensions. He made himself into not only one of the greatest of wire walkers but one of the world’s more remarkable entertainers and athletes.

In 1972, he garnered his first world record when he walked two and a half miles on a 300-foot high wire strung 120 feet above the pavement at the Canadian National Exhibition. In 1980 he strolled to the top a replica of the Eiffel Tower at the Kings Dominion Amusement Park in Virginia, and the following year actually lived on a wire for 21 days in San Juan, Puerto Rico, setting a second world record. In 1984 he conquered the famous Golden Arch in St. Louis, ascending well above it on a breathtaking 1,800 foot wire.

But he didn’t stop there. He headlined jaw-dropping performances at the Superdome in New Orleans, the Atlanta-Fulton County Stadium, Oklahoma State Fair, JFK Stadium, Kennywood Park, and Silver Springs Nature Park. He walked 300 times over the Space Ship Earth at Disney’s Epcot Center, the entire length of the Minnesota State Fair, and a mind-boggling 2,000 feet to the top of the Sports Needle at Hershey Park in Pennsylvania. And that was just a portion of his accomplishments.

But in 1995 he accomplished a feat that dwarfed them all and put his competitors from as far back as the first man to step upon a high rope, behind him. In that year, he built the greatest high wire in history, a 2,100-foot-long and 1,350-foot-high work of art that stretched over the Yangtze River at the Three Gorges in China. Then, he conquered it. Floating gracefully more than a quarter of a mile in the air, watched by 200,000 people in person and more than one hundred million on live television, “The Prince of the Air” became a legend in China. Afterward, his image appeared on a Chinese stamp, his name on a school, and it became impossible for him to walk any street in China without being veritably mobbed.

But Jay still wasn’t satisfied. He had been raising money for children in financial need or with health concerns for some time, but his Asian experience, a spiritual as well as physical one in the Qutang Gorge, bathed in the adoration of the Chinese people, many of whom had so little but were grateful for what they had, made him want to do more. He began dedicating his life and his subsequent performances to helping children in need, kids who wanted to achieve dreams just like he had. Sometimes those dreams were simply the hope of staying alive.

In 1996, the year after the Yangtze ascension, he broke his fourth world record by crossing a 600-foot wire to the top of the 525-foot Pearl of Orient Tower in Shanghai, China, accomplishing this feat at night in front of hundreds of thousands of spectators, the greatest performance of that kind ever seen. 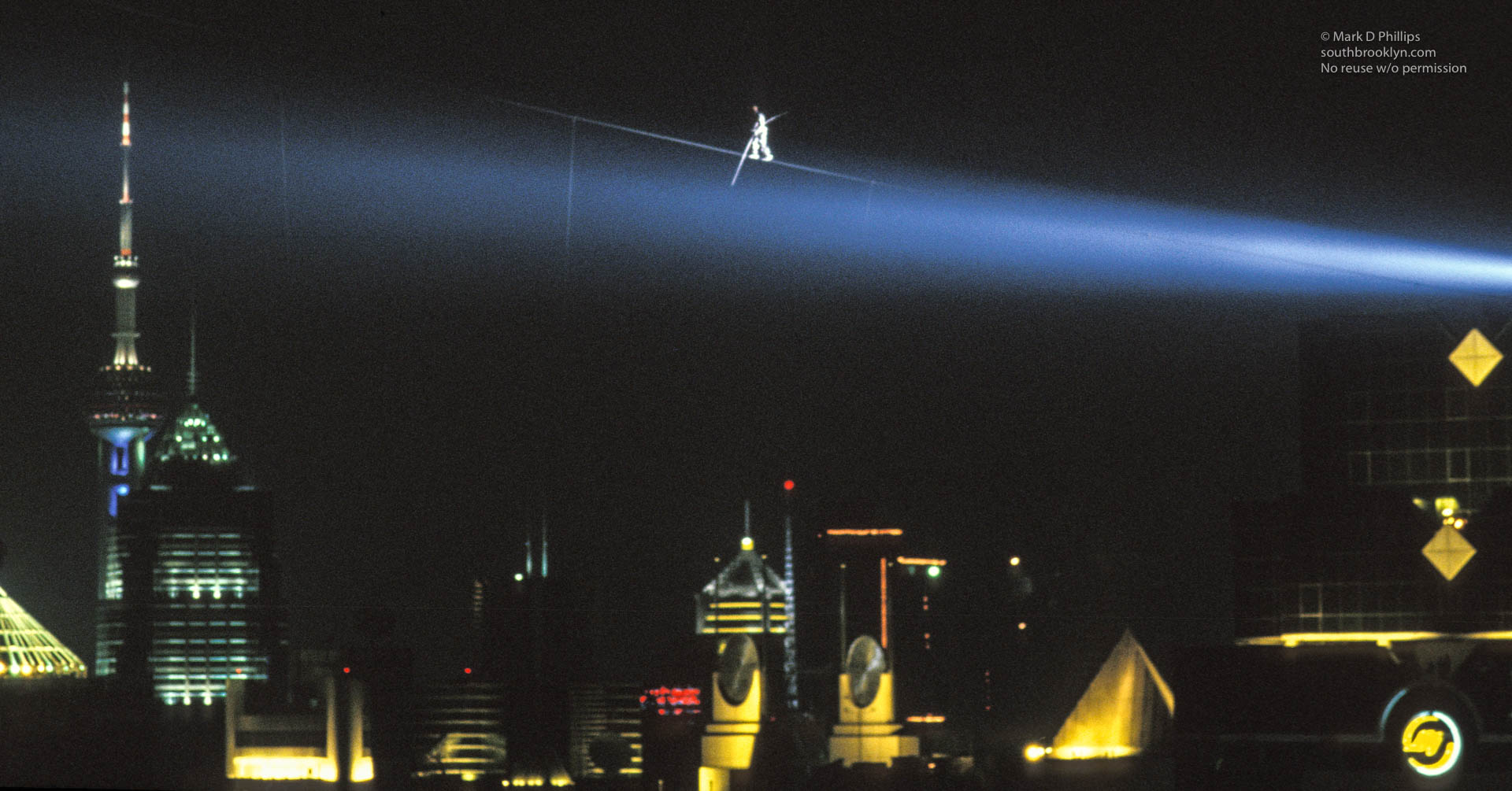 His shows were often recorded for film and television. He even spoke live on a microphone while high in the sky, discussing not just his wires but his work for children. In 1998 in Las Vegas, he walked blindfolded at night for a live national U.S. television network (and minutes before he began, removed the safety harness that authorities had insisted he wear). The following year, in Port Hope, Ontario, he went one farther by filming himself as he performed on his apparatus for a documentary about wire-walking legend, The Great Farini.

Cochrane didn’t slow down in the 21st century. He opened the millennium, with the greatest building to building walk in world history, a stunning 2,200-foot stroll over the Love River in Taiwan. Requests continued to come to him from all over the globe to bring his unique art to other beautiful natural sites.

<In his last decades, however, he often turned his attention to a particular, unparalleled site, a great love of his life, Niagara Falls. In 2002, 2005, and 2008, he performed on wires of ascending length and height at Niagara, using its major hotels, towers, and Casino as the ends of his spectacular one-man bridges, producing stunning photographs seen around the world: The Prince of the Air in the sky with the magnificent cataracts as background. In 2012, at the age of 68, he returned to perform upon the greatest Niagara sky-wire ever, strung from the top of the Skylon Tower to the top of the Hilton, a breathtaking 750-feet high. It was baffling to many experts why he was not chosen to walk over the falls that same year, when Nik Wallenda performed the feat, especially when he had been requesting permission to do it for so many years. The mind boggles at what a Cochrane walk over the falls, replete with his unparalleled skill and imagination, and his ability to bring attention and funding to needy children, would have been like./p>

In his career, Jay Cochrane graced thousands of high wires, walking more than the distance between New York and Los Angeles and back. There is no one, now or in history, who is his equal. 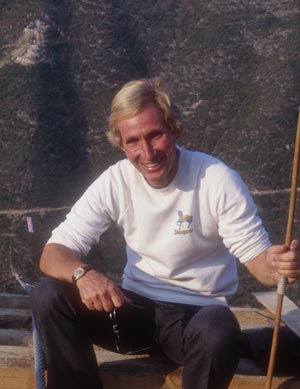 But this man who ran away with the circus as a boy, who dreamed of a life as exciting as an adventure novel and then went out and lived it, did more than just become a wire-walking legend. He used his walks, his platform, for charity and gave away many of his earnings for children in need around the world. That, to him, was his greatest legacy. Each time he ascended another of his magnificent wires, he inspired others, and not just children but adults, to have hope, to believe that the impossible can be accomplished, that dreams could come true.

He was eminently quotable. To talk with him was liking sitting in an audience. One simply wanted to listen. He was funny, sometimes a little ribald, and always to the point. He often said that he believed that when he died it wouldn’t matter how famous he was or what his feats he had accomplished; the question would be did he inspire others, make a difference in lives, and help those in need? The answer seems obvious.

Jay died of pancreatic cancer and braved his final months with the same sort of fortitude that he walked the wire. He asked that any gifts given in his honor after his death be funds sent to The Tender Wishes Foundations in the Niagara region, which helps ease the live of terminally ill children, and the Boys and Girls Club of Niagara Falls.

Everyone who knew him was not only absolutely awed by his accomplishments but deeply honored to have been his friend.